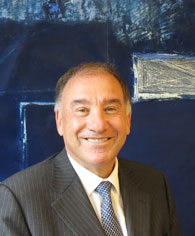 He started his career in marketing and international business strategy at Olivetti in 1983. In 1985 he moved to Chase Manhattan Bank NA (now J.P. Morgan Chase) where, after a period of training in London and New York, he worked in the M&A division in New York. In 1987 he returned to Italy as Vice President and Managing Director of Chase Investment Bank where he was responsible for M&A and Equity Investment in Italy.

In 1988 he co-founded and was Managing Director of Chase Gemina Italia S.p.A., a joint company established by Chase Manhattan Bank NA and Gemina S.p.A. specialised in risk capital investments, and in 1989 he co-founded Private Equity Partners S.p.A., which shortly became one of the main and most well-recognized institutions on the Italian and international market. He is Chairman of Equita PEP Holding S.r.l. and Board member of several listed and unlisted Italian companies.

He is member of the MP3 Observatory on Public Private Partnerships of L. Bocconi University, the Advisory Board of the Italian Society of Financial Analysts (AIAF) and the Past Chairmen Group of EVCA (European Private Equity and Venture Capital Association - now Invest Europe). He is Chairman of the Why Not Italy? Group, Faculty Member of AIFO Academy (Italian Family Officer Association) and member of various scientific and research groups.

Among others, he was Chairman of EVCA in 1994-1995; member of the General Council of Private Equity of the Italian Private Equity Venture Capital and Private Debt Association (AIFI); Chairman of the Supervisory Board of the Chase Gemina Polska Sp. z o.o. (Warsaw); member of the Innovation Board of the Ca’ Foscari University Foundation in Venice; of the Scientific Committee of the Ca’ Foscari International College; of the Advisory Board of the Italian Society of Financial Analysts (AIAF); of the Supervisory Board of the Slovak Post Privatisation Fund (Bratislava) representing the EBRD (European Bank for Reconstruction and Development); of the Foreign Investors Committee of Confindustria; of the Advisory Committee of the Italian Stock Exchange; of the EU Expert Group on Private Equity and Venture Capital and Board member of several Italian and foreign companies and institutions.

Graduated with honours in Business Economy at the University Ca’ Foscari in Venice, in 2009 he was granted the “Cafoscarino Alumnus of the year 2008” award by the Ca’ Foscari Alumni Association in Venice.